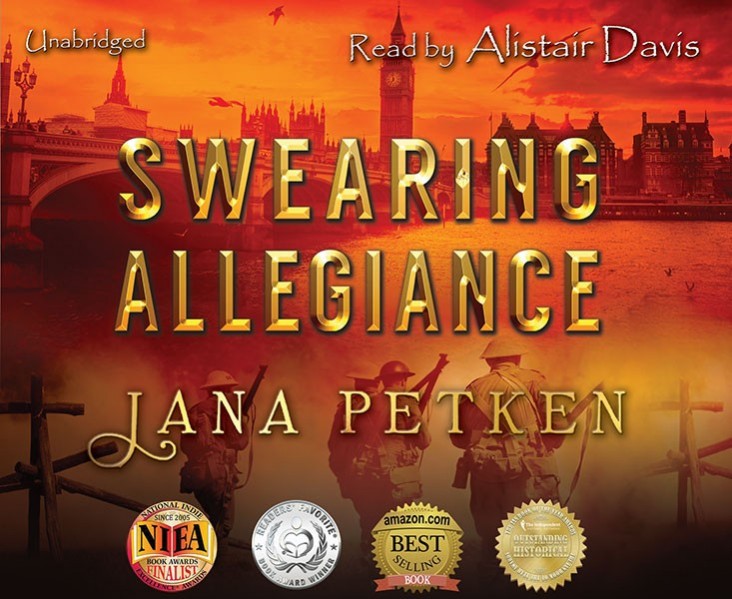 Swearing Allegiance: Part 1 of The Carmody Saga, about love, war, and betrayal, set during the First World War. April 1916 An Irish Easter uprising lays waste to Dublin and fractures a British Empire struggling to supply men and arms to defeat Germany. In Dublin’s ruins, the affluent and celebrated Carmody family are not only forced to confront the rebellion’s devastating effects on their personal lives but also the terrible secrets and lies uncovered in the midst of grief. Forced to abandon their home in the Irish capital for London, each family member must strive to survive poverty, the horrors of war, and personal bouts with excessive pride and passion – but loyalty to family proves to be the most difficult cross to bear. Danny, the youngest, is a republican rebel who risks everything to fight for an independent Ireland. Patrick, a surgeon, swears allegiance to Britain and joins His Majesty’s Royal Navy, which is engaged in tense battles to control the seas. Jenny, self-entitled and strong willed, sees her wedding plans and grand ambitions disintegrate. With a fiancé incarcerated in a rebel prison camp and no prospects of her own, she faces the unimaginable challenge of working in one of London’s munitions factories.

I’m a great fan of Jana Petken’s writing/storytelling and was excited to discover her latest novel, Swearing Allegiance (The Carmody Saga Book 1). Set during The Great War (WW1) comes a story that depicts wartime, vividly excruciating and brilliantly written. From page one, the action begins full on, unrelenting in the horrors of war torn Irish loyalists fighting to protect their land. Innocent civilians are shot down in the street and we instantly gain sympathy for the characters we meet, and our hearts break when the Carmody father is ripped cruelly from his son, shockingly altering the lives of the rest of the his family.
No detail is spared right down to the swallowing document thrown off as sweets to the inquirer. The roots are planted and the action doesn’t let up as we move through time and battles, from war in Ireland to the Great War, from Ireland to London, the bombings with subsequent devastation to Jenny Carmody, to the seas and the disaster of a sinking ship with all the accompanying horrors. Petken shines in bringing scenes alive through well-developed characters that burn from the pages as the human condition plays out with themes of love, betrayal, conflicts of war, and country-sibling rivalry. I especially loved Jenny whose life is altered and instead of succumbing she grows and shows great fortitude. Fate shows her thin-skinned fiancé out to be what he is, to her ultimate advantage. I particularly liked the subplot love stories—the distances traveled from London to Whales to recaptured and reclaim one’s heart’s desire—and the love that knows no bounds under the umbrella of the love of family. There is so much richness, appropriate historical representation, scene depiction, and action that one could write a lengthy essay on the value of this novel and Petken’s understanding of the cruelty of war. Suffice it to say this is sure to become a classic.