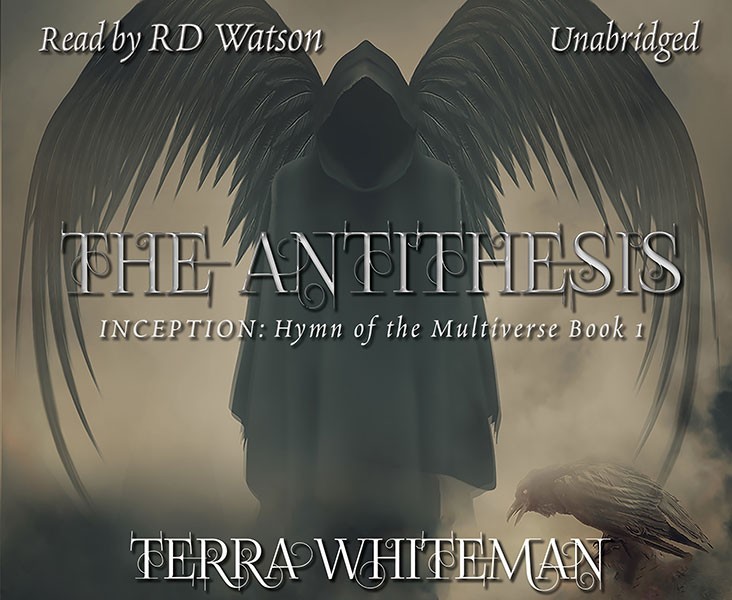 The Antithesis: Inception, by Terra Whiteman. Book one of the Hymn of the Multiverse Series. Read by RD Watson.

Civil war between demons and angels lies just on the horizon.  Justice Alezair Czynri, newest recruit of the Purgatorial Jury, is thrown into a world of murder, exploitation, mind-altering substances and bureaucratic red-tape as he and his court attempt to diffuse escalating conflicts. And beneath the turbulent surface, things are very wrong. Ever since his induction into the Celestial Court, Alezair has been treated with disdain by the Justice Commander, Leid Koseling. A former prisoner of the Nexus Initiative, Justice Czynri exists without any memories of his former life, the consequence of being a slave merc for hire. Whispers in the void tell him there's something more to Leid--more to all of this--but neither the celestials nor his colleagues are willing to divulge their dark history, barbed with slavery, control and genocide. Yet Purgatory seems strangely familiar, and slowly little pieces start coming back. There might be a good reason why Alezair's boss keeps him at arm's length.

Review of The Antithesis: Inception (Hymn of the Multiverse Book 1) by Terra Whiteman Kindle Edition

I have to give credit to Terra Whiteman for a story that is very engrossing and exciting. Which ironically has more bureaucracy than you might expect. Yet even those parts are punctuated by intense action. In this exploration of the “multiverse” you will follow the life well maybe after life might be a better term of a being that will become known as Alezair 'Justice' Czynri a judge in the epic battle of evil vs good, well I do believe the better way it is put forth here is nature vs nurture. I will say along this journey I did find having a knowledge of world religions to be an asset in enjoying the book, well more the occult of world religions. But, I would not say it is necessary, and if nothing else it may lead to doing research into the matters.
I will say that the narrative was quite the page turner, however I will warn the reader that once finished you will have more questions than answers. Many of these I believe will be answered in subsequent books, but not all of them that is for sure. But, if ever there was a book that need a compendium to go along with it this is certainly one that I believe does. Over all I do highly recommend The Antithesis: Inception (Hymn of the Multiverse Book 1) by Terra Whiteman and cannot wait for more installments of this story.