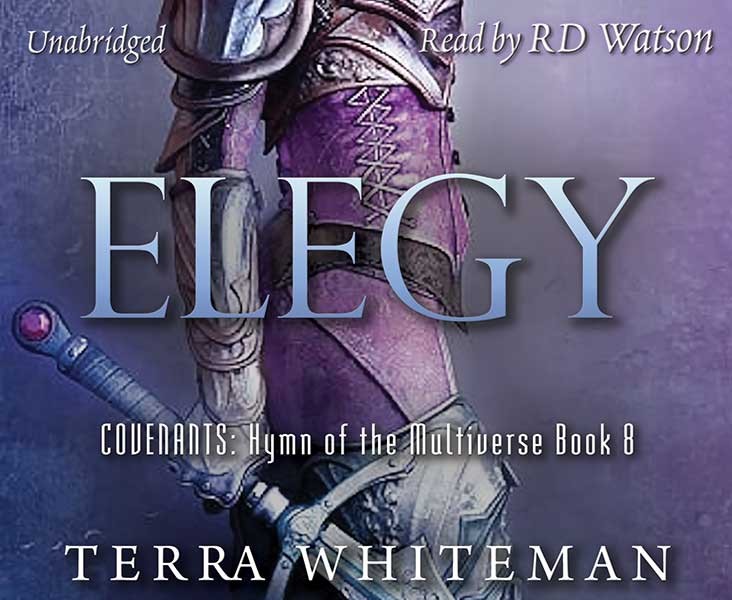 Covenants: Elegy, by Terra Whiteman. Read by RD Watson. Book 8 of the Hymn of the Multiverse series.

Laith knows what loss feels like. She knows it in her bones, and in the way her minder, Akani, looks at her whenever Laith's attention is diverted. She knows it in the way that her father dies a slow, painful death as he succumbs to the wrath of a plague that has ravished the Evgans, her people, for centuries. She knows it in the loneliness and isolation of having nothing to attain except title of Queen of the Svissan Isles. And then her world ends. Ziranel Throm, Scholar of the Court of Enigmus, is contracted by the Ophali Systems Confederacy to safeguard and escort the Evgani Tribal Princess, Dezidka Laith, when their moon is descended upon by rebel forces trying to rupture the system's alliance. Their destination is an interplanetary government headquarters, but unforeseen events leave them stranded on a planet not under confederacy rule. Ziranel is now faced with the task of keeping a frightened and naive adolescent girl alive in a world rife with hostile terrain and savage locals. And then there's the little problem of the place he keeps ending up whenever he sleeps; the place Laith tells him is a gateway, guarded by monsters. He also wonders why sometimes her skin turns iridescent and she falls into a vegetative state. He wonders why shadowy figures seem to follow them wherever they go, not-entirely-corporeal. Ziranel Throm is an experienced member of his Multiversal Protectorate. He always knew better than to entertain ideas of the metaphysical domain. Until now.