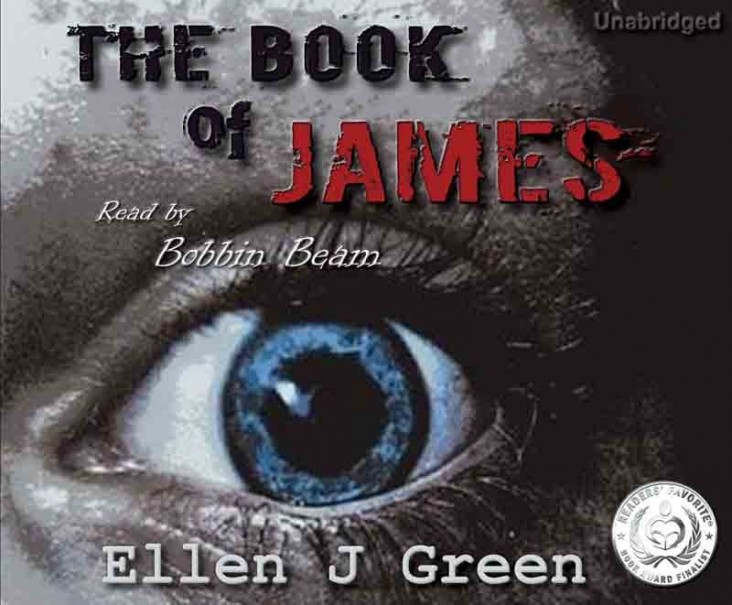 The Book of James, by Ellen J. Green.  Read by Bobbin Beam, with music by Kevin MacLeod. Unabridged CD audiobook.

Moments before his death following a tragic car accident, Nick whispers warnings to his wife that someone from his past may attempt to harm or even kill her. He urges her to travel to Philadelphia to his childhood home. Find James, he insists. It’s the only way out. Mackenzie dismisses her husband’s warnings, assuming his words were a result of blood loss and morphine…until the things he outlined start to come true. Her search brings her to the Chestnut Hill section of Philadelphia and face to face with a mother-in-law believed to be dead. Together in the same house the two women’s stories spin together, each with an agenda. Cora is desperate to protect secrets from the past. Mackenzie is determined to uncover those very secrets and find the elusive James before time runs out.  A gallery of photographs in the bowels of the house holds clues to generations of abuse, treachery and possibly murder. Messages hidden in Nick’s childhood Bible within the Epistle of James have Mackenzie racing against time to put the pieces together, unearth the reasons her husband chose to vanish when he was sixteen years old, and locate the person mentioned in Nick’s dying breath.  When James is finally found, the results are more horrifying than Mackenzie could have ever imagined.