Robert Thaler is an award winning actor having worked on Broadway with the Royal Shakespear Company​ and in many theaters across the country. He was a principal star for three years on the daily soap Santa Barbara before his love interest on the show, Robin Wright, rolled his character's lifeless body off a cliff and into the Pacific. On nightime television he starred in a somewhat forgettable series, The Renegades. On stage In L.A. he played the title roles in both Hamlet and Macbeth directed by Patrick Stewart and the late Charles Marowitz, respectively. Bob traded on Wall Street for ten years at a Commodities desk and one day while commuting to work a friend loaned him a copy of the audio book 1984. This recording got him back into storytelling. 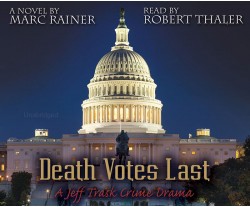