Jaime Johnesee worked as a zookeeper for fourteen years before deciding to focus on her passion of writing. Her decision has proven to be a good one, as her books have been received with critical acclaim including OH, THE HORROR and SHIFTERS, which was recognized as one of the Best Horror Novellas of 2012. Although her initial foray into the literary world has been marked by success, Jaime has only just begun and is a force to be reckoned with in the years to come. 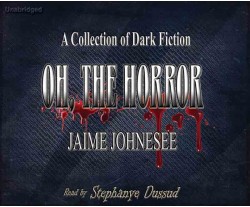